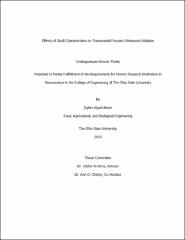 Transcranial focused ultrasound (FUS) thermal ablation is an emerging incision-less treatment for neurological disorders such as Parkinson’s Disease and Essential Tremor. As an emerging treatment option, the factors affecting FUS treatment efficiency are not yet well understood. The two primary goals of this study were as follows: to investigate the relationship between skull parameters and treatment efficiency, and to create a technique to estimate temperature rise during FUS using methods and principles from statistics, heat transfer, thermodynamics, and wave mechanics. We used a new open-source software, Kranion, to simulate FUS treatments using head Computer Tomography (CT) images. Results of simulations from 28 subjects were compared to clinical data to validate Kranion. A penetration metric (Beam Index) was calculated by combining the energy loss due to incident angles and the skull thickness. We observed significant differences in the distribution of incident angles between different stereotactic targets in the brain. Using the Beam Index as a predictor of temperature rise, in a linear-mixed-effects model, we were able to predict the average temperature rise at the focal point during ablation with <21% error (55±3.8°C) in 75% of sonications, and with <44% (55±7.9°C) in 97% of sonications. This research suggests that the Beam Index can be used to better predict temperature rise during FUS.