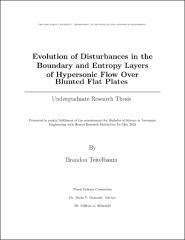 Compared to laminar flow, turbulent flow causes significantly higher drag and heat transfer to an object in the flow, representing a major design challenge for all flight vehicles. This challenge is made only more difficult on hypersonic vehicles, for which drag and high temperatures are already of major concern. Laminar-turbulent transition is a complex process which can follow many paths. When freestream disturbances are small, transition of supersonic boundary layers on sharp plates has been shown to be the result of second-mode instabilities. As the leading edge is blunted, the transition location moves downstream, which is understood as a stabilizing effect on the secondmode instability. However, once a certain bluntness is reached, experiments have demonstrated the movement of the transition location back upstream, a phenomenon known as transition reversal. Reversal is not explained by the second-mode instability and no explanation for this phenomenon yet exists. The current project will serve as a building block for future work with the ultimate goal of demonstrating transition reversal and providing an explanation for this phenomenon. In order to achieve this goal, this project will first discuss results for the mean flow over a sharp plate. Then a technique for determining the most unstable frequency of disturbance at any location will be developed. This technique will be demonstrated on the sharp plate for which the most unstable frequency can be determined by Linear Stability Theory. In demonstrating the validity of this approach, the groundwork will be laid for applying this technique to two blunted plates for which Linear Stability Theory does not predict a reversal in the trend of the unstable frequencies. Base flow results for these two blunted plates will be discussed, while the application of the developed technique to the blunted plates is the subject of ongoing work. The ability to determine the most unstable frequency without Linear Stability Theory will provide a tool to validate LST results and provide insights into receptivity mechanisms to understand the system response to frequencies not predicted by Linear Stability Theory.