Acquisition of dialectal features in a second language: The case of the Castilian Spanish voiceless interdental fricative 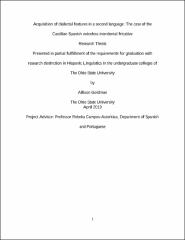 This study explores how L1 (first language) English speakers learning Spanish as an L2 (second language) acquire the voiceless interdental fricative /θ/ that occurs contrastively only in the Castilian dialect of Spanish. More specifically, our study explores how the use of this sound develops in L2 learners of Spanish who are spending/ have spent time in Spain and aims at elucidating what factors contribute to the use (or not) of this sound by the learners. The study contains a sociolinguistic component as well, since language attitudes by the L1 English speakers towards this sound are considered as a possible factor in the acquisition process. The Spanish language is spoken in a wide variety of countries, which results in a large number of different dialects with distinct characteristics. For example, in northern and central Spain we find the Castilian dialect, which includes a phoneme only found in this variety, i.e. the interdental fricative: /θ/. This sound is of interest because it exists in very few dialects of Spanish, and contrastively, only occurs in Castilian Spanish. This phenomenon is called distinción, by which there is a contrast between an interdental fricative, represented orthographically by the graphemes <ci>, <ce> and <z>, and a voiceless alveolar fricative, /s/. Other dialects tend to have only the phoneme /s/ (a situation called seseo; Hualde 2005). This dialectal feature becomes especially interesting when considering second language acquisition of Spanish by English speakers, and interest in this stems from two features. First, English possesses the interdental sound /θ/ but it corresponds with a different grapheme, i.e. <th> such as in think and Cath. Second, most American English speakers are not necessarily exposed to this Spanish sound in their L2 classes but, rather, they encounter it for the first time, and in a systematic manner, when they study abroad in Spain (Ringer-Hilfinger, K. 2013). Previous studies have focused on the acquisition of the voiceless interdental fricative in participants who have spent eight weeks up to three months in Spain (e.g. George 2014, Knouse 2012), but we include participants who have spent nine months or more in the country. We also explore L2 linguistic attitudes surrounding the sound, which are not considered in previous studies. First, this study analyzes whether there are any linguistic factors that promote the acquisition of the interdental sound by L2 learners of Spanish. Some of the factors the study considers are the frequency of use of the words that contain the sound and whether the sound appears in word-initial position, word medial position, intervocalic position, or following a certain consonant. Second, we examine how the amount of time spent in Spain influences the acquisition of /θ/, an issue that we also relate to questions of linguistic identity and native English speakers’ attitudes towards the Castilian dialect. Consequently, to explore this aspect, we take into account sociolinguistic factors such as amount of time spent learning Spanish, motivation for learning, and the speaker’s language competency. We hypothesize that all of these factors influence speaker attitudes of the sound or dialect, which could contribute to whether or not a speaker acquires /θ/. The study examines two groups of participants: Group A is comprised of American university students studying abroad for a period of six to eight weeks (N=4), and Group B consists of native speakers of English who have lived in Spain for nine months or longer (N=4) . Participants were recorded while performing three tasks designed to elicit different types of speech: (1) reading of a list of sentences, which elicits careful speech; (2) describing ten pictures of food, which elicits more fluid speech; and (3) an oral interview to elicit spontaneous speech. The sentence list for the first task contained tokens with the target sound in a variety of positions in the word and with different phonemes that represent this sound. For the photos, each was a picture of a food item whose word contains the target sound. We also included two foods whose names do not contain the target sound. In the oral interview, participants were asked about their Spanish education, opinions about Spanish culture, and thoughts about the voiceless interdental fricative in order to gather information about the sociolinguistic aspect of our study regarding L2 learner language attitudes. Next, we conducted an acoustic analysis using the program Praat, with the objective of finding patterns in the production of the interdental sound. More precisely, each token, i.e. a /θ/ in Castilian Spanish, was perceptually coded for its place of articulation (alveolar or interdental) and acoustically analyzed. Some tokens of /s/ were also analyzed in this way for comparison purposes. Upon analysis of the three tasks, we conclude that there are a few linguistic factors that promote the production of the voiceless alveolar fricative, including when it appears in a stressed syllable, in word-medial position, and in the onset of the syllable. In terms of orthographic context, orthography plays a role depending on the task, because while in the reading task /θ/ occurred more the grapheme <ci>, in the other two tasks <z> was the grapheme which elicited a high production of /θ/. Additionally, found that the amount of time spent in Spain does affect the production rate of /θ/. Members of Group A, who had spent less time in Spain, did not produce the interdental sound nearly as much as Group B, who had been living in Spain for nine months or longer. There were more interdentals produced by both groups in the interview task which is unexpected, because we would expect this sound to occur more frequently in the reading task, which elicits careful speech. Finally, we conclude that L2 linguistic attitudes do not have an effect on Group A, but do have an effect on Group B because although Group A had an overall positive attitude towards the sound, this did not result in a high production rate. As for Group B, they also had overall positive attitudes towards /θ/ and a higher production rate.