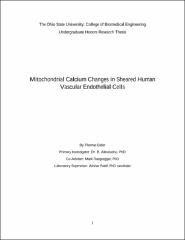 Endothelial cells are subjected to various forces and stresses causing physiological reactions to occur. Changes in cytosolic and mitochondrial calcium due to shear forces/stresses are required to maintain homeostasis of the cell. Monitoring these changes are vital to scientific research and are done using fluorophores. Human umbilical vein endothelial cells (HUVECs) were subjected to two fluorophores with different excitation and emission wavelengths, Fluo-4 and Rhod-2. While examining collected data, it was noted that during a static baseline recording, premature excitation of Fluo-4 fluorescence was being experienced by some cells. The cause of this excitation was phototoxicity, a result of light exposure. A static baseline was conducted using only Fluo-4 in which no phototoxicity was experienced. An experiment was then analyzed using MATLAB comparing the fluorescence over time in cells that used both Fluo-4 and Rhod-2. It was shown that early fluorescence was occurring in multiple cells as well as an overall decrease in fluorescence over time, indicating photobleaching. These results indicated that Rhod-2 was causing the photoactivation of fluorophores. Previous studies potentially explain the mechanism to be an increase in radical oxidative species (ROS) which activate the inositol 1,4,5-trisphosphate receptor. Further studies will be conducted without the use of Rhod-2 and instead will use an adenovirus to transfect cells.