Visual Methods of Geographic Analysis of Gentrification in Columbus, Ohio 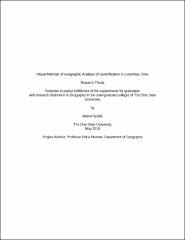 In an attempt to chronicle the process of gentrification, visual records of Franklinton, Columbus were captured in conjunction with statistical and theoretical analysis. Franklinton is a neighborhood on the west side of the Columbus, Ohio, metropolitan area in Franklin County. In recent years, the Franklinton neighborhood became known as a largely impoverished and run-down area, however the physical and social landscape of Franklinton is changing through the process of gentrification. This study focuses on analyzing and capturing these patterns of gentrification occurring between 2010 and 2017 in order to determine how a visual method, in this case photography, can be used to communicate issues of a changing geosocial landscape. Marxist foundations provide the basic indicators of gentrification, but the addition of new perspectives is essential in fully comprehending the multiple social scales that are interacting, as well as the authored organization of space. Photography is important in the simple accessibility to knowledge that it provides. Although backing a potentially biased method like this with theory and statistical tests is important, it is not necessary to have a background in either in order to understand the message of the images. Revalorization and gentrification are parts of a cycle and by providing photographic evidence of that cycle throughout time, it will be easier to recognize gentrification indicators and perhaps understand the repercussions of such.