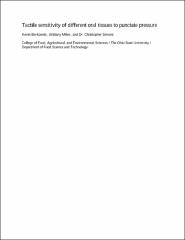 The tongue has been shown to be a highly sensitive area to tactile stimuli; however, little has been studied on the other tissues in the mouth, such as the gums and hard palate All three tissues play a role in the mastication process. The purpose of this study was to see which tissue has the greatest sensitivity to punctate stimuli. It was hypothesized that the tongue would be the most sensitive tissue compared to the hard palate (HP) and gums because of its greater deformability even at very low forces and active role in texture perception. To test this hypothesis a punctate pressure sensitivity just-noticeable-difference (JND) threshold was determined for 30 individuals (aged 18-40, 17F/13M) via the forced-choice, up-down staircase method using Luneau Cochet-Bonnet Aesthesiometers to deliver a range of very-low forces (F=0.0044-0.010g). The tongue (0.00192±9.6e-5g) was found to be significantly more sensitive than both the HP (0.00252±0.000 21g) and the gums (0.00288±0.00023g) (p=0.019 and p<0.001, respectively). JNDs for the hard palate and gums, however, were not significantly different (p=0.235) This order of JNDs (tongue, hard palate, gums) was also the most common on an individual basis (n=12), and binomial probability indicated that this was a very significant effect (p=0.0015). These findings are in agreement with the hypothesis that the tongue would be the most sensitive tissue to punctate pressure. The tongue is a softer surface than the gums or the roof of the mouth. Future studies could use other types of texture stimuli to provide an improved overall understanding of what occurs with the various tissues.