The Effects of Demographic Change and Education on Vote Share 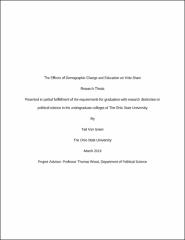 In this paper, I examine the effects of changes in the Hispanic population at the county level on changes in G.O.P. county vote share between the 2008 and 2012 elections, as well as the 2012 and 2016 election. In both cases, the effect of increases in the Hispanic population at the county level is to decrease the change in G.O.P. county vote share, meaning the counties move towards the Democratic Party. However, this effect is much larger in 2016 than it was for 2012. Theorizing that effect of education on vote choice could be driving this disparity, I use VOTER study group data to examine the effect that education, attitudes on trade, and racial resentment had on G.O.P. vote choice in 2012 and 2016. I find that education became a stronger negative predictor of G.O.P. support in 2016, trade attitudes go from being not significant to a significant predictor of Trump support, and racial resentment is a very strong positive predictor of Trump support.