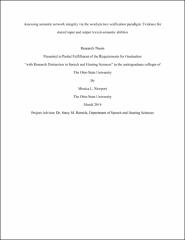 There has been disagreement in the literature about whether semantic information is processed by a single or multiple semantic systems. Lexical-semantic processing is frequently assessed and often impaired in aphasia, an acquired language disorder commonly occurring after a stroke or brain injury. The purpose of the current study is to partially replicate Hillis, Rapp, Romani, and Caramazza’s study (1990) to ascertain whether their findings, in support of a single semantic system, would be generalizable to a larger group of individuals with varying types of aphasia. It is hypothesized that a uniform error pattern across input and output lexical-semantic tasks will be observed, supportive of a single modality-independent semantic processing system. Twelve individuals with aphasia completed confrontation naming and auditory and reading word-picture verification tasks as part of a larger study. The study revealed no significant difference in semantic errors on these two tasks despite the differences in modality. This uniform error pattern across comprehension and production tasks lends continued support to Hillis and colleagues’ Organized Unitary Content Hypothesis (O.U.C.H.), suggesting that there is a single semantic system accessed during language processing. Clinically, these findings could help inform decision making with patients with aphasia and motor speech deficits by helping to identify locus of impairment. However, continued investigation is needed to shed more light on how exactly WPVTs can be used in speech-language therapy for aphasia.