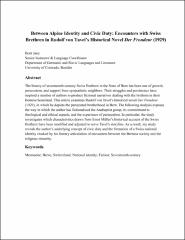 The history of seventeenth-century Swiss Brethren in the State of Bern has been one of growth, persecution, and support from sympathetic neighbors. Their struggles and persistence have inspired a number of authors to produce fictional narratives dealing with the brethren in their Bernese homeland. This article examines Rudolf von Tavel's historical novel Der Frondeur (1929), in which he depicts the persecuted brotherhood in Bern. The following analysis exposes the way in which the author has fictionalized the Anabaptist group, its commitment to theological and ethical aspects, and the experience of persecution. In particular, the study investigates which characteristics drawn from Ernst Müller's historical account of the Swiss Brethren have been modified and adjusted to serve Tavel's storyline. As a result, my study reveals the author’s underlying concept of civic duty and the formation of a Swiss national identity cloaked by his literary articulation of encounters between the Bernese society and the religious minority.