The Sarah Morgan Bryan Piatt Recovery Project
JavaScript is disabled for your browser. Some features of this site may not work without it. 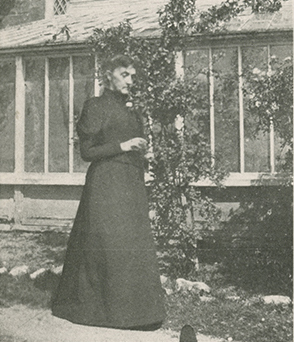 Sarah Morgan Bryan Piatt (1836-1919), a popular, prolific, and acclaimed poet during her lifetime both in the U.S. and abroad, published more than 600 poems in venues including popular, influential, and well-regarded newspapers; elite magazines; anthologies; and periodicals for children. (No firm total is possible at this time; in fact, the results of this project to date make it clear that more works by Piatt remain to be discovered.) Born outside Lexington, Kentucky into two slaveholding families, her earliest poems were published in the 1850s by the top editors of the age, including George D. Prentice of the influential and well-known political newspaper the Louisville Daily Journal and Robert E. Bonner of the blockbuster story paper The New York Ledger. Published when she was an unmarried woman, her early poems appeared under her maiden name, Sallie M. Bryan, or under her initials, S.M.B. In 1861, just as the Civil War was breaking out, she married John James Piatt (most often called "J.J."), a poet from Ohio, and the newlyweds moved to Washington, D.C., where J.J. worked as a government clerk. Thereafter, Sarah published under variants of her married name. She and J.J. and their growing family would live in multiple locations in the subsequent decades, including Queenstown, Ireland (now Cobh) from 1882-1893, while J.J. served as U.S. Consul, Cork. Their primary home remained North Bend, Ohio, outside Cincinnati.

For decades, Sarah's work met with national and transatlantic acclaim, and she continued to publish in periodicals as well as in book form, eventually totaling eighteen volumes. Despite her robust reputation in her lifetime and her significant body of work, she fell into obscurity upon her death in 1919. At that time, modernist poets were turning against their poetic predecessors, and against women poets in particular, as allegedly stodgy and conventional. (Only recently have these twentieth-century ideologies of poetic value themselves become subjects of scrutiny and critique.) In a remarkable cultural turn whose full history remains to be written, Piatt was rediscovered in the 1990s by numerous scholars working independently of one another. Since that time, she has quickly gained stature as a major artist.

The Sarah Morgan Bryan Piatt Recovery Project includes multiple kinds of initiatives designed to collect works by Piatt not currently available in modern editions and to provide records of the early waves of her recovery. This project is ongoing. At present, it includes Oral Histories and Written Memoirs by scholars who began the work of recovering Piatt from oblivion and restoring her to literary history and public memory. In this collection, scholars who contributed to the first and second waves of Piatt's recovery tell their stories about how they came to "find" Piatt—and why they identified her as a major author deserving of cultural reclamation. The Sarah Morgan Bryan Piatt Recovery Project also includes The Early Poems of Sarah Morgan Bryan (Piatt) in the New York Ledger, 1857-1860, a digital archive of her early poems published in the Ledger and not otherwise available in any published edition of her work; and The Capital, 1871-1880 , which makes free for public access all issues of The Capital published from 12 March 1871 through 22 Feb. 1880. A rare Washington, D.C. weekly newspaper and important historical record of Reconstruction, this paper was founded and managed by Donn Piatt, Sarah Piatt's cousin by marriage, who often featured her poems in its pages.

The “Resources for Teaching and Study” page will collect a growing array of materials, at present including independent first-wave Piatt scholar and Lutheran pastor Larry R. Michaels' catalogue of Piatt's Biblical allusions and a co-authored essay by first-wave scholars Paula Bernat Bennett and Karen L. Kilcup about Piatt's recovery and importance.