The 1917-2017 History of The Ohio State University Department of Agricultural Communication, Education, and Leadership 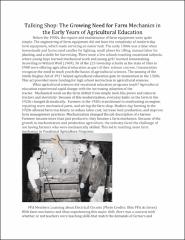 On July 1, 2017, the Department of Agricultural Communication, Education, and Leadership (ACEL) at The Ohio State University will celebrate its 100th anniversary. The Smith-Hughes Act of 1917, which marked the beginning of the increased growth in agricultural education across the country, is simultaneously celebrating its 100th anniversary. Before the act was passed, Ohio had 50 public schools offering agricultural courses, so the demand for agriculture teachers was growing tremendously. Thus, the Smith-Hughes Act provided the funding needed to educate more individuals to teach agriculture in public schools. Consequently, the Department of Agricultural Education was established at The Ohio State University. Research on the history of the department was conducted and published in 1969 by Willard H. Wolf. The publication was prepared for the centennial of The Ohio State University. This publication is being utilize in my project to gather information on the department between the years of 1917 and 1969. My project will focus on gathering the remaining of the information from 1992 to present day, organizing the previous historical research, and gather photographs for the displays for promoting the anniversary. My results will contribute to the celebration of the department starting on July 1, 2017 and continuing through the next academic year.