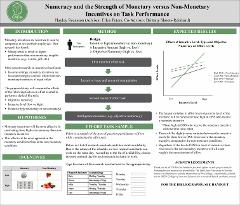 Background: Traditionally, monetary incentives (such as paychecks and bonuses) have been one of the primary methods companies use to show their employees that the work they do is valued (Bonner & Sprinkle, 2002). Generally, past research has found that money tends to result in higher performance than non-monetary, tangible incentives (e.g., a meal, gift, etc.). More recent research has found that in some settings, a monetary incentive is less motivating to workers’ effort and productivity than a non-monetary incentive of equal value (Heyman & Ariely, 2004). However, there may be reason to believe that non-monetary incentives may not influence everyone equally. This, in part, could be due to objective numeracy, defined as the ability to understand and use probabilistic and other mathematical concepts (measured with a math test; see Peters et al., 2006; Cokley & Kelley, 2009; Pachur & Galesic, 2013). Methods: The proposed study will examine the effects of numeracy and incentive level (low or high) and type (monetary or non-monetary) on effort exerted to perform a task. Specifically, participants will receive either a high or low amount of a monetary (money) or non-monetary (Jelly Belly Jellybeans) incentive. To separate skill from motivation, participants will complete the task, be told what incentive they will receive, and complete the task again. Expected Results: Based on the prior research, we think that the low monetary incentive will be more de-motivating (i.e., people will expend less effort) than the other conditions. This will be especially true for those high versus low in objective numeracy. Conclusions: These findings would suggest that employees in certain vocations that require a higher level of mathematical comprehension, such as accountants and engineers, may be more sensitive to the amount of monetary incentives. All in all, through further research on the relationship between objective numeracy and the dynamics of non-monetary and monetary incentives on effort and performance we will be able to gain greater insight into the most optimal methods for incentivizing individuals with a focus on individual happiness and life satisfaction.