THE GEOCHEMISTRY OF MINOR CATIONS WITHIN ANTARCTICA STREAM WATER: DETERMINING THE ROLE OF THE HYPORHEIC ZONE 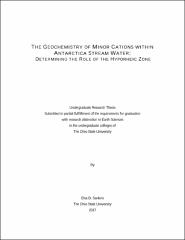 The McMurdo Dry Valleys, Antarctica, are a polar desert containing ephemeral streams driven by glacial meltwater that flow 4–12 weeks in the austral summer. These streams contain a shallow area of porous sediment known as the hyporheic zone where there is rock-water interaction and water can be temporarily stored. Major cations have been analyzed in these streams every year since 1992, but only one other study has analyzed minor cations (Li, Rb, Sr, Ba) in these waters. This study is the first to examine minor cation concentrations in comparison to changes in discharge and in stream transects. Transect samples were collected at three streams that flow into the ocean: Wales, Commonwealth, and Miers, and diurnal samples were collected at Von Guerard Stream and Anderson Creek. Streams were analyzed for Li, Sr, Rb, and Ba, and their concentrations ranged 0.1–2.3 µM, 0.3–1.1 µM, 5.1–11.7 nM, and 0.03–0.3 µM, respectively. Downstream profiles show increases in Li, Rb, and Sr moving downstream, suggesting chemical weathering or rapid salt dissolution. Chemostatic plots for Von Guerard Stream and Anderson Creek show solute mobilization and production varies in proportion to flow, as previously seen with the major cations (i.e., Na+, Ca2+, K+, Mg2+). This suggests that one of two processes control concentrations: rapid dissolution or hyporheic exchange. Hysteresis plots at Anderson Creek show both alkali and alkaline earth metals move in a clockwise rotation, where concentrations are higher on the rising limb than the falling limb. In Von Guerard Stream, alkali metals show clockwise rotation, while alkaline earth metals show an increase in concentration as discharge decreases. These results suggest that the source of alkali metals in stream water is from rapid salt dissolution, while alkaline earth metals originate from weathering in the hyporheic zone. These results help to explain chemical weathering and hyporheic exchange within the McMurdo Dry Valleys and therefore understand the structure and limitations in this ecosystem better.