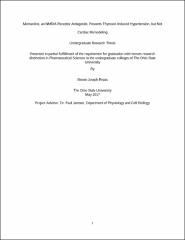 Stimulation of glutamatergic tone has been causally linked to myocardial pathogenesis and amplified systemic blood pressure (BP). Memantine, a non-competitive N-Methyl-D-aspartate glutamatergic receptor (NMDA-R) antagonist, has been proposed to be an active cardioprotective drug. However, the efficacy of memantine and subsequently the possible involvement of the NMDA-R in the thyroxin (T4)-induced cardiovascular complications have never been investigated. We examined the effect of memantine (30 mg/kg/day/I.P) on the T4 (500 µg/kg/day/I.P)-provoked increase in mouse BP as well as cardiac hypertrophy and reformed reactions of the contractile myocardium both in-vivo and ex-vivo following 2 weeks of treatment. Memantine alone did not result in any cardiovascular pathology in mice. Instead, memantine significantly prevented the T4-triggered systemic hypertension. But, it did not reverse cardiac hypertrophy, coupled in-vivo left ventricular (LV) dysfunction or ex-vivo right ventricular (RV) papillary muscle contractile alterations of the T4-treated mice. Our results openly direct the cardiovascular safety and tolerability of memantine therapy. Yet, extra research is necessary to endorse these prospective advantageous outcomes. Also, we believe that this is the first study to inspect the possible role of NMDA-R in the T4-stimulated cardiovascular disorders and concluded that NMDA-R could play a key role in the T4-induced hypertension.