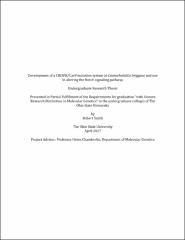 Notch and the Epidermal Growth Factor (EGF) are crucial growth pathways found across almost all species of animals. Many types of cancers develop from malignant mutations afflicting these pathways; some can even result from negative distortions in both. In order to further understand the basic operation of Notch and EGF, research on lower model organisms is necessary. The nematode vulva provides an ideal case to study where the two pathways interrelate. In the development of the vulva of the nematode C. elegans, Notch interacts with the EGF pathway in order to specify different types of vulval cells. Current research focuses on comparing this interaction to the process in a related species, C. briggsae. We find that in C. elegans, the vulval development is entirely dependent on EGF signaling, while in C. briggsae vulval cells divide even if EGF signaling is blocked. Comparison of the signal interactions in these two species provides a model for how different genetic backgrounds may impact cell division regulation. This project is testing the hypothesis that these cell divisions result from EGF-independent Notch signaling. To better understand Notch signaling in C. briggsae, the LIN-12/Notch receptor will be genetically manipulated in order to constitutively activate and block this signaling pathway in the vulval precursor cells (VPCs). This will be done by creating sgRNAs and specific repair templates that will induce mutations in the LIN-12 gene through the CRISPR/Cas9 system. The EGF pathway will then be blocked in these C. briggsae mutants to determine how the manipulations compare to those observed in C. elegans. Worms will be observed throughout the process to provide evidence of details that govern how the two pathways interact differently between the species. By understanding these interactions more in depth, pathway interplays evidenced by nematodes can be extrapolated to orthologous pathways in humans in order to more fully comprehend the signals that lead to growth in human cells.