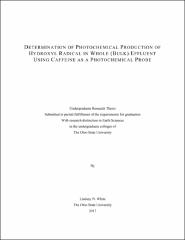 Hydroxyl radical (•OH) acts as strong oxidizer in wastewater effluent and in natural water systems. Hydroxyl radical is a highly reactive, non-selective reactive oxygen species (ROS) that is generated in photochemical systems primarily from organic matter (OM) and nitrate (NO3-) and is primarily scavenged by organic matter (OM) and carbonate species. Previous research has shown that indirect photolysis via reaction with •OH is the primary pathway of caffeine degradation in effluent and natural surface water samples. An objective of this project is the support or rejection of using caffeine as a photochemical probe for measuring [•OH]ss in the presence of varying levels of effluent organic matter (EfOM), NO3-, and carbonate chemical species (measured as alkalinity) in five whole (bulk) wastewater effluent samples collected from cities surrounding Columbus, Ohio. An initial rates method was used to determine photochemical values. Alkalinity, dissolved organic carbon (DOC), nitrate, specific UV absorbance (SUVA254nm), the absorbance at 254 nm to 365 nm (E2/E3 ratios) were also experimentally determined to provide additional data in this current field of research. Values for steady state ([•OH]ss (in units of fM)) were obtained to be 1.01±14.16 for DEL, 1.95±4.63 for MAR, 1.24±1.89 for PIC, 0.99±2.38 for NEW, and 1.14±12.57 for LON, which were within expected ranges for effluent waters (0.2-1.5 fM) via photochemical generation. This work supported research into using caffeine as a photochemical probe for hydroxyl radical with some qualifiers. Precision of the data was found to be significantly impacted based on minor adjustments to how some variables were calculated using the initial rates method.

Marcus J. and Lottie C. Lieberman Scholarship Fund of the School of Earth Sciences
Swink Theatre Scholarship of the Department of Theatre