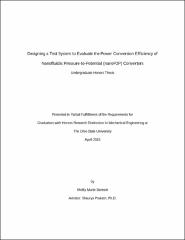 Nanofluidic pressure-to-potential converters, nanoP2P converters, are a possible clean source of energy that could reduce the United States’ consumption of fossil fuels by harvesting waste pressure to generate usable electrical potential. As envisioned, nanoP2P converters would collect waste pressure from movement, such as traffic or an individual’s walking motion, and apply it over a bank of nanochannels filled with ionic solution. The pressure-driven flow of ions through the nanochannels generates a streaming potential that can be harnessed as electrical power. Prior research on nanoP2P converters with induced fluidic slip determined a theoretical maximum power conversion efficiency of 70%, however, the greatest reported efficiencies of devices without slip are only around 1%. The objectives of this project are to conduct case studies to assess the theoretical feasibility of nanoP2P converters in real-world applications and to design and implement a testing system that will apply 85 psi from a compressed air valve to simulate the waste pressure streams that would be found in the projected end-use. This research demonstrates that nanoP2P converters can feasibly supplement up to about 50% of the electricity consumption of streetlights in optimal conditions. However, this technology does not seem appropriate for supplementing the power of traffic lights at large intersections. In the case of using nanoP2P converters to power personal devices from human movement, theoretical percentages of smart phone consumption were much less than one percent, meaning this application is not feasible either. In the assembled test setup, tubing runs from a compressed air source to a T-connector sealed to a device fabricated in the Microsystems and Nanosystems Laboratory. Epoxy was used to seal the T-connector to the device, however this method seems to yield varying results. Streaming potential data has not been collected due to leaky connections at the T-connector base.

The Undergraduate Honors Committee in the College of Engineering