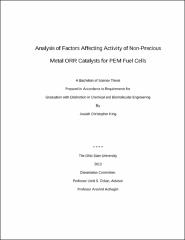 Fuel cells are currently the focus of much interest and research. They are also an integral part of the Hydrogen Economy and show much potential for environmentally-friendly mobile and stationary power generation. Of the types of fuel cells, the proton exchange membrane fuel cell (PEMFC) has shown traits desirable for vehicular application including short start-up times and lower operating temperatures. One of the major hindrances to commercialization of PEMFCs is that platinum is used for the cathode. This is an issue because of platinum’s limited availability and cost, both of which would not work well with economies of scale. These limitations have encouraged research into non-precious metal catalysts (NPMC) for PEMFCs. This project was concerned with the development of NPMC for PEMFCs and was focused on improving catalytic activity so that NPMCs can operate comparably to platinum. Several NPMCs were synthesized for this project. The multistep-preparation process began with wetness impregnation followed by ballmilling, heat treatment in an inert gas, and ended with heat treatment in a reactive gas. The effects of varying the non-precious metal precursor used in wetness impregnation, inert gas, reactive gas, and reactive-gas heat-treatment duration will be explored. Electrochemical experiments to determine the activity of these catalysts were completed, and it was found that the second heat treatment improved catalytic activity. Statistical analysis will also be used to qualitatively determine the influence of preparation parameters on catalytic performance. This project aimed to examine the feasibility of using statistical modeling for estimation of the influence of preparation parameters on catalytic activity of NPMC towards the ORR with the long-term goal of optimization of catalytic activity and eventual marketability of NPMC catalysts.