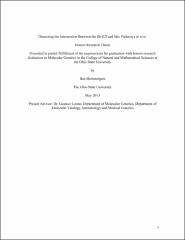 Cancer can be defined as unregulated cell growth. This uncontrolled proliferation often stems from the disruption of transcriptional pathways. Some cell cycle regulators have been well characterized, however the interaction between some important pathways have not been thoroughly studied in vivo. The relationship between the important tumor suppressor Retinoblastoma (Rb) and the E2F family has been studied extensively. At the same time, c-Myc is a transcriptional activator that has been shown to be critical for proper proliferation, differentiation, and apoptosis. While the Rb/E2F and c-Myc pathways are well defined individually, their interaction in vivo is unknown. In this study, we first demonstrate that deletion of either E2f1-3 or c-Myc are able to rescue an Rb deficient phenotype. Secondly, we show that combinatorial deletion of E2f1-3 and c-Myc reveal a subset of genes that are synergistically regulated by both E2f1-3 and c-Myc. These results suggest that the pathways of these transcription factors overlap more than originally thought, and further analysis of transcriptional affiliation will be paramount to understanding carcinogenesis.