The Role of VEGF in Macrophage Recruitment During Wound Healing 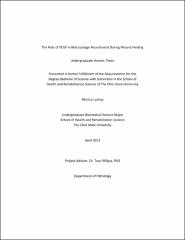 Inflammation is an important first step in the wound healing process. During inflammation, macrophages are recruited to the wound site to clear debris, kill microbes and mediate subsequent steps of repair. Vascular endothelial growth factor (VEGF) is produced at high levels in wounds, and it is best known for stimulating new blood vessel growth by binding to VEGF receptors on endothelial cells. However, VEGF receptor-1 (VEGFR-1) is also expressed on the surface of macrophages and VEGF has been shown to induce migration of macrophages in vitro. We hypothesize that VEGFR-1 is important in the migration of macrophages to a wound site in response to VEGF. We generated a unique conditional knockout mouse strain that lacks VEGFR-1 only in macrophages using the Cre-lox system. These mice were utilized to explore the role of VEGF in macrophage recruitment to wounds in vivo. Wound healing studies were performed in conditional macrophage VEGFR-1 knockout mice (KO) and control mice. Full thickness excisional wounds were administered on the dorsal skin using a 3mm biopsy punch. Wounds were collected after 5 days for analysis of macrophage recruitment and wound closure. First, macrophage recruitment was quantified in wounds by immunohistochemistry. Wound sections were stained for F4/80, a macrophage specific cell surface marker, and the number of macrophages was counted. Control wounds contained a significantly higher average density of macrophages when compared to knockout wounds. Wound closure was also assessed by measuring reepithelialization in H&E stained wounds. Only 15% of knockout wounds exhibited complete wound closure, compared to 42% in control wounds, suggesting that wounds in knockout mice healed more slowly. Angiogenesis and cell proliferation were also assessed, but no differences were observed between knockout and control groups. These studies point to a direct role of VEGF:VEGFR-1 signaling in the recruitment of macrophages to a wound site and suggest that a reduction in macrophages may lead to delayed wound healing. Defining the pathway by which macrophages are recruited to a wound will broaden our understanding of the wound healing process. This could lead to better therapeutic methods in the treatment of wounds to increase healing efficiency and reduce abnormal wound healing.