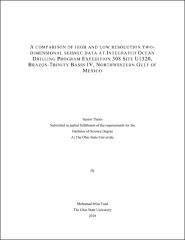 This thesis links well data to seismic data in Brazos-Trinity Basin IV, Northwestern Gulf of Mexico, well log data from International Ocean Discovery Program (IODP) Expedition 308 in 2005 and publicly available seismic reflection data acquired in the year 1988. Currently, Expedition 308 well logs and cores have only been tied to a proprietary 2D seismic dataset owned by Shell Oil that is higher resolution (with peak frequency at ~300Hz yielding a vertical resolution of ~1m) than publicly available 2D data. Therefore, it is useful to know how the seismic units that have been defined in the higher resolution proprietary data link to the lower resolution but publicly available seismic data to aid in future research projects. The study was conducted by performing a well-tie analysis using well log data (gamma ray, bulk density, resistivity, and compressional-wave velocity) and checkshot survey data. Six reflectors were identified from the well tie and all six reflectors were successfully identified and mapped in the 2D data. The results suggest that the 2D publicly available data can be used effectively, especially for general results. Future work could include mapping the identified horizons to other 2D data in the basin and conducting detailed synthetic seismograms for a more rigorous analysis of the well tie correlation.