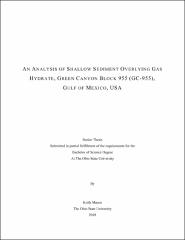 Green Canyon Block 955 lies in the Gulf of Mexico 158 miles SW of the current Mississippi River delta. Block 955 lies seaward of the Sigsbee Escarpment and to the west of Green Knoll in water depths of about 2000 m. Ancient restricted basins deposited vast amounts of salt evaporites that were overlain unevenly by deltaic and marine deposits from the North American craton, which results in a complex near-seafloor geology in the modern-day Gulf of Mexico. Among several key sediment transport processes that result from the prevalent salt diapirism are unstable slopes, which in turn facilitates slope failures, the deposits of which are termed mass transport deposits (MTD). Independent of salt-effects, slope failures have also been suggested to be triggered or facilitated by near-surface gas and gas hydrates. The study area of GC955 has been previously studied due to the occurrence of gas hydrates that lie above a salt-dome as identified in multichannel seismic data and well logs. This thesis focuses on a near-surface mass transport deposit and examines the relative roles of salt and gas hydrates in the origin of the slope failure. Near seafloor lithology is dominated by marine mud interbedded with pulses of sand rich channel deposits, some pulses contained methane hydrate filled fractures. The results here show that the failure plane of the slope failure does not correlate to the present-day hydrate-bearing sections and suggests that hydrate influence was minimal. A preferred interpretation is that the effects of upward-rising salt created relatively steep slopes that ultimately played a more significant role in the origin of the landslide.