Married with Children: Assessing the Relationships between Marital Status, Presence of Children, and Mental Health in Poland 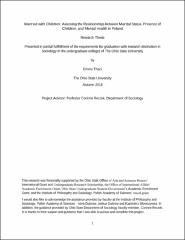 Cross-national research has historically suggested that marriage has the potential to lead to improved wellbeing for individuals (Fincham and Beach 2010). Having children can also boost wellbeing, though the impact is different based on marital status (Angeles 2010). With historically strong divisions between men and women in health, it is important to investigate how these relationships differ based on gender as well. Despite the breadth of past research on these subjects, there is relatively little research on the relationship between marital status, having children, gender, and mental health outcomes in Eastern Europe, and post-communist Poland in particular. This research investigates the relationships between these variables for Poland in 2013. I used the Polish Panel Survey POLPAN, a longitudinal panel survey of the adult population conducted every five years since 1988. My main dependent variables were social isolation and emotional health from the Nottingham Health Profile (NHP), along with a likert scale item on psychological mood. I employed multivariate linear and logistic regression of these wellbeing items on marital status, presence of children in the household, and gender to compare associations and relationships between these variables. I found that marital status was significantly associated with positive mood for women. Positive emotional state and being married, however, did not show a significant relationship in 2013, regardless of gender. A larger proportion of those who were married with children in the household reported negative emotional health, as compared to unmarried people with children. Having children had a negative association with emotional health for women, and no association with social isolation. For married men, having children did not significantly affect emotional health, but it did increase social isolation. In general, these results are similar to that of previous research conducted in Western Europe. The historical divisions in gender roles and labor within the family explain why the results were different for men and women.