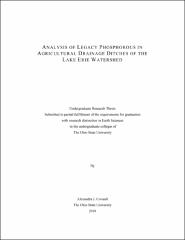 Agricultural best management practices have reduced the total phosphorous (P) being delivered to Lake Erie for almost 40 years, yet the proportion of bioavailable P (soluble reactive phosphorous, SRP) has steadily increased, contributing to harmful algal blooms. A possible continuous source of P to Lake Erie is sediment in agricultural drainage ditches, which contains SRP in pore waters, as well as sorbed P that can be released due to changes in redox conditions. Physical sediment properties and P content were analyzed in ten cores collected during the spring of 2018 from two agricultural drainage ditches in the Lake Erie watershed. These spring cores were compared to summer cores that were collected at the end of the previous growing season from the same locations. A two-step extraction process designed to measure loosely sorbed P and P sorbed to redox-sensitive iron and manganese oxides was utilized to determine concentrations of P. On average, the concentration of P sorbed to redox-sensitive metal oxides was an order of magnitude greater than loosely sorbed P, demonstrating the potential importance of metal oxidation state in the mobility of P. Overall P content was greater in summer cores. Seasonal changes could be due to agricultural practices such as fertilizer application or more natural changes in aquatic plant growth and flow within ditches. Stagnant summertime flow and an abundance of organic matter could drive anoxic conditions in pore water and mobilize P associated with redox-sensitive metal oxides. One site consistently had greater P concentrations across both seasons, but P concentration also varied strongly within sites. Cores with more organic matter tended to have greater P content. Overall, these results suggest that variations in hydrology and sediment composition could influence hot spots of P retention and release throughout the watershed.