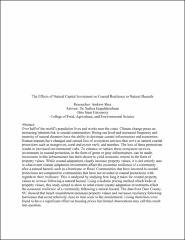 Over half of the world’s population lives and works near the coast. Climate change poses an increasing inherent risk to coastal communities. Rising sea level and increased frequency and intensity of natural disasters have the ability to decimate coastal infrastructure and economies. Human impacts have changed and caused loss of ecosystem services that serve as natural coastal protections such as mangroves, coral and oyster reefs, and marshes. The loss of these protections results in increased environmental risks. To enhance or replace these ecosystem services, investments in coastal protection, in the form of green or gray infrastructure, can be made. Investment in this infrastructure has been shown to yield economic returns in the form of property values. While coastal adaptations clearly increase property values, it is not entirely sure to what extent coastal adaptation investments affect the economic resilience of a community after a natural hazard, such as a hurricane or flood. Communities that have invested in coastal protections are compared to communities that have not invested in coastal protections with regards to their resilience. This is analyzed by studying how long it takes for coastal property values to recover following a natural hazard. Using a hedonic pricing method which looks at property values, this study aimed to show to what extent coastal adaptation investments affect the economic resilience of a community following a natural hazard. The data from Dare County, NC showed that beach nourishment increases property values and increases resiliency following hurricanes that occur relatively close in time scale to the nourishment. Living shorelines were found to have a significant effect on housing prices but limited observations may call this result into question.