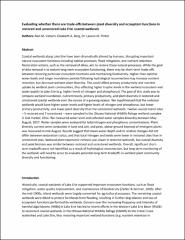 Coastal wetlands along Lake Erie have been dramatically altered by humans, disrupting important natural ecosystem functions including habitat provision, flood mitigation, and nutrient retention. Restoration actions, such as the removal of dikes, aim to restore these natural processes. While the goal of dike removal is to restore long-term ecosystem functioning, there may be short-term trade-offs between restoring particular ecosystem functions and maintaining biodiversity. Higher-than-optimal water levels and longer inundation periods following hydrological reconnection may increase nutrient retention, but decrease wetland plant diversity. This could affect primary productivity and nutrient uptake by wetland plant communities, thus affecting higher trophic levels in the wetland ecosystem and water quality in Lake Erie (e.g. higher levels of nitrogen and phosphorus). The goal of this study was to compare wetland inundation, nutrient levels, primary productivity, and plant diversity in restored and unrestored coastal wetlands over the course of a growing season. We hypothesized that the restored wetlands would have higher water levels and higher levels of nitrogen and phosphorus, but lower primary productivity, and lower plant diversity than the unrestored wetlands. Twelve coastal marsh sites – 5 restored and 7 unrestored – were sampled in the Ottawa National Wildlife Refuge wetland complex in Oak Harbor, Ohio. We measured water level and collected water samples biweekly between May-August, 2017. Water samples were analyzed for total nitrogen and phosphorus concentrations. Plant diversity surveys were conducted in June and July, and peak, above-ground biomass of emergent plants was measured in mid-August. Results suggest that mean water depth and its relative changes did not differ between restoration status, and that total nitrogen and levels were lower in restored sites than in unrestored sites. Wetland plant taxonomic richness was lower in restored wetlands, but overall diversity and peak biomass was similar between restored and unrestored wetlands. Overall, significant short-term tradeoffs were not identified as a result of hydrological reconnection, but long-term monitoring of the wetlands will need to occur to evaluate potential long-term tradeoffs in wetland plant community diversity and functioning.