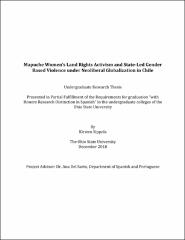 The Mapuche are Chile’s largest indigenous group, representing about 10% of the national population. In 1881, the Chilean Republic violently defeated the Mapuche Nation and began appropriating Mapuche land for economic purposes, often selling it to private corporations in extractive industries, such as the timber and hydroelectricity industries. This process has continued largely uninterrupted, speeding up as Chile began employing a neoliberal form of capitalism in the 1970s, which continues to the current day. The Mapuche, especially Mapuche women, have fostered a robust activism against the state’s land grabs, which challenges the hegemonic capitalist mode of production. In this thesis, discourse analysis is used to examine the Chilean state’s reaction to four particular Mapuche women activists and their opposition towards the state’s accumulation of capital. Primary evidence comes from news articles found within Mapuche news sites. I demonstrate that the Chilean state has responded to these four activists with gender based- and ethnic violence, using its sovereignty—particularly, its monopoly on violence and legislative power, exemplified through the Chilean Antiterrorism Law—as a tool repress Mapuche women. These findings are then used to support the idea that Dr. Rita Laura Segato’s concept of the “Second State” in Mexico applies to the Chilean state, as well, and that this Second State is particularly harmful towards Mapuche women activists in the stage of neoliberal capitalism.