Ecopoetry in Translation: A Critical Rendition of Ulrike Almut Sandig's "so I've heard it said" 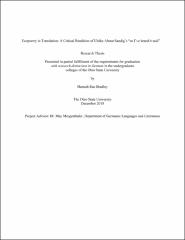 Only recently have scholars begun to discuss the implications of the Anthropocene for the translation of literature, introducing a new practice and study of ecotranslation. In view of the Anthropocene––a term popularized by Paul Crutzen that describes the current epoch as one in which human activity gains a significant, largely negative impact on geology, and ecosystems, literary scholars believe they can transform this dominant anthropocentric culture, which they believe is responsible for the ongoing ecological destruction, including climate change and loss of biodiversity. Ecotranslation is understood as translation from an ecological perspective, which can mean the following: retranslating literature where nature had been previous silenced in translation, translating texts that present an ecological worldview, and finally translating non-ecological texts into ecological ones (Badenes/Coisson 2015). My thesis combines a translation of a poem by German author Ulrike Almut Sandig, called “so habe ich sagen gehört” (so I have heard it said), published in a collection of poetry, Lyrik im Anthropozän (Lyric in the Anthropocene, 2017), with an introductory ecopoetic interpretation and a commentary on the translation process and result. Sandig’s poem can, as I argue, be interpreted as an ecopoem, following the definition by Zemanek/Rauscher (2018). The authors define ecopoetry as a subcategory of nature poetry that meets one or more of the following criteria: a thematic treatment of nature; presentation of nature as a complex ecosystem; an eco- or biocentric worldview; the articulation of environmental concerns; or the formal representation of ecological principles like interdependence, and cyclic structures. “so habe ich sagen gehört” contains four of these features: a main motif of a forest; a deemphasis of the poetic subject; a list-like structure which mimics the scientific classification of nature; and the presentation of environmental concerns. My translation aims to retain these features, while also bringing them into a North American ecological and cultural context. In my conclusion, I reflect on the question of to what extent human language can ever formulate an ecocentric point of view, as it expresses specific human relationships to the world, for instance in its sounds and the process of naming.