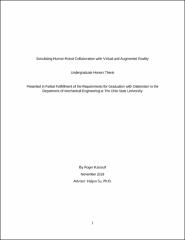 Robots do work for humans that is often undesirable, whether dirty, dull, or dangerous. As the pace of automation continues, division and sharing of labor between man and machine is expected to increase in manufacturing. Conventional robots exert high forces and are difficult to program, limiting their use to large-scale enterprises. Collaborative robots (“cobots”) are an alternative that resolve these issues, due to built-in force-limiting sensors and intuitive hands-on programming. This allows a human to perform complex and delicate tasks, while the robot performs undesirable tasks. However, small-to-medium scale enterprises do not fully know what possibilities exist for including a cobot in their operations without physically obtaining a robot. Nonphysical design tools for robotic systems are built on software that is targeted to a technical audience. The research aimed to develop an interactive design tool for the implementation of cobot collaboration, that would be accessible to a non-technical audience. This was done leveraging virtual reality (VR) and augmented reality (AR) technology to create an immersive experience with digital content. While VR is limited to a purely digital experience, AR allows users to superimpose VR elements in the real world. The Unity 3D game engine was used as the software development platform, paired with the Microsoft Hololens VR/AR headset as the human-simulation interface. A Universal Robots UR-10 cobot manipulator was modelled to accurately reflect its size, shape, and movement behavior. A virtualized scenario of metal grinding and polishing was then created with the UR-10 cobot model acting as an assistant to the human. The design tool is considered successful at meeting the objectives for simulating human-robot collaboration. It may open opportunities for non-technical persons in manufacturing to understand how to implement a cobot in their enterprise. Furthermore, the tool may serve as a basis for future developments into advanced manufacturing design with VR/AR and collaborative robotics.