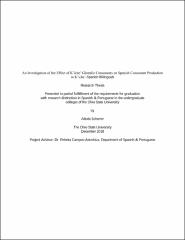 K’iche’ (Quiche’) is a Mayan language spoken in the central highlands of Guatemala by the K’iche’ people, an indigenous Maya group. It is comprised of over 2,000,000 speakers and is recognized as the second-most spoken language of Guatemala after Spanish. Of the K’iche’ speaking population, some 300,000 speakers are monolinguals, with the remaining population having some degree of Spanish proficiency. The current study explores the linguistic production of Spanish by bilingual K’iche’-Spanish speakers. More precisely, this study is an investigation of the influence the glottalic consonants featured in the sound inventory of K'iche' on the production of Spanish consonants by bilingual speakers in the region of central Guatemala. Glottalic consonants are consonants produced with air from the glottis, as opposed to the lungs, and are not found in the majority of the world's languages, including Spanish. With the majority of native K’iche’ speakers having bilingual proficiency in Spanish, this study intends to analyze the production of Spanish consonants by K'iche'-Spanish bilinguals. The goal is to determine the effect of K’iche’ glottalic consonants /ɓ t’ k’/ on the production of Spanish consonants /p t k/ dependent upon the language dominance of the speaker, and to observe differences in the strength of this effect among the different types of K’iche’– Spanish bilinguals. Of prime importance to this study is the effect of K'iche' ejective consonants /t'/ and /k'/ on the production of their Spanish counterparts /t/ and /k/. The influence of K'iche' glotallic consonants is examined through the Voice Onset Time (VOT) duration of bilingual speakers' productions of /p t k/. Past research indicates that the phonetic inventory of L1 (first language) can influence the production of L2 (second language) speech sounds, depending on the age of acquisition (Kang & Guion 2012). In addition to this, it is found that high frequency of L2 usage is associated with more successful native-like speech production (Flege et. al 2002). The results of this study indeed suggest that K’iche’ ejective consonants and language dominance play a role in the production of Spanish plosives /p t k/ by K’iche’-Spanish bilinguals, and further research is encouraged to determine the extent of this effect.

I would like to thank the College of Arts and Sciences and Honors and Scholars program for providing me with funding to complete my project.