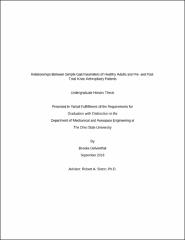 The way that people walk can change as a function of age and the progression of disease. Previous research has shown that older people tend to walk with a slower speed, exert more control at the hip joint, and exhibit reduced control at the knee and ankle joints. The onset of knee osteoarthritis (OA) causes muscle weakness and knee instability, and results in a decreased knee range of motion in OA patients. Advanced cases of OA require a total knee arthroplasty (TKA) in attempt to restore original joint anatomy, but suboptimal outcomes are very common, and leave patients with remaining knee instability and walking abnormalities. Current gait analysis requires the use of expensive motion capture technology systems and many measurement tools to achieve the desired data. A more simplified method of data collection and analysis is desired to streamline gait analysis and compare various populations. The purpose of this study was to apply a single, simplified metric to identify the differences of gait between older healthy adults and patients with OA, before and after TKA. Using existing motion capture data from each of these populations, the trajectory of the toe was plotted with respect to a fixed reference point of the hip, forming a shape that resembles an ellipse. These plots were analyzed for each population using their respective length, area, and angles. The footpath characteristics were correlated to patient-reported outcome surveys (KOOS) and a clinical outcome measure of 6-minute walking distance (6MW). Comparisons between patient populations revealed no significant relationships between footpath trajectory characteristics amongst cohorts. However, those patients who improved after surgery walked with a footpath that was longer in length and more parallel to the ground than before surgery. Additionally, larger length and angle values showed positive correlations with better functionality outcomes, suggesting that longer strides are a more desirable gait feature. Still, due to a lack of significant results, the applied metrics may be too simple to be used as accurate tools to classify patient functionality in OA/TKA. Future work should investigate the metrics of footpath in other populations, such as younger healthy adults or patients with other neurological diseases, and explore other ways to simplify gait analysis. Establishing simple measurements to characterize the differences of gait between patient populations can give healthcare professionals a tool to concentrate rehabilitation techniques based on current patient condition.