Unstable Democracy: How a History of Coup d'état Sculpted Populism in Modern Turkey 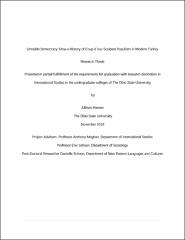 While often understood as a recent phenomenon, populism has a long and storied history in Turkish politics that dates back to the first multiparty elections in 1946. Since 1950, not only has a populist party consistently appeared on the election ticket, but these parties have often garnered hefty support and elections have often resulted in a populist party either holding the majority of cabinet positions or participating in a coalition government. Yet during the 20th century, the power of populist parties has repeatedly been curtailed by military interventionism, culminating in three successful coups (1960, 1971, 1980), and one “post-modern” coup in 1997. In each of these instances, the military and the political elite aimed to use their influence and support as a check on the rise of populist leaders and movements. With each coup, the political landscape and the role of populism began to change. The coups of the 20th century were met with a high degree of public support, as they were framed as actions to restore order or as necessary precautions for the preservation of Kemalist ideals. Yet with the rise of the Adalet ve Kalkınma Partisi (AKP) over the past two decades, and the establishment of the party under current president Recep Tayyip Erdoğan, a populist party has been allowed to flourish. Similarly to the past trajectories of populist parties, in 2016 a coup attempt was carried out against the AKP; yet, this time the coup attempt was both unsuccessful and wildly unpopular amongst Turks. This raises the question: what changed? In this thesis, I examine how the AKP—a populist party that emerged from the remnants of parties that were eliminated in the 1997 coup—has thrived in an environment that has systematically quelled the rise of previous populist parties.I argue that the continued legacy of defunct political parties has ensured the ever-presence of a populist party in Turkish politics, with its modern rendition being the AKP. Building on this foundation, I analyze the AKP’s rise to power and examine the steps taken by the party to ensure its continued survival and its ability to thrive as a populist and Islamist party. I argue that the AKP, learning from a history of coups, skillfully crafted a platform that would grant it access to the highest levels of government while appearing relatively benign to the military, unlike its previous counterparts. Once the AKP had gained a majority in parliament, Erdoğan and his party began the long process of dismantling the system that has, historically, prevented the rise of populist parties. Through a mass crackdown on the so-called “deep state” in Turkey, the ruling party was able to preemptively undermine any attempt at overthrowing the regime. The failed coup attempt in 2016 all but sealed the fate of this non democratic counter-weight that had prevented the rise of populism in the past, as the AKP used the coup to justify mass purges and power grabs, gutting the military and any semblance of opposition power. I conclude by exploring what the failed coup attempt means for the future of populism in Turkey and the nation’s relationship with the military. In short, the removal of dissenting figures allowed populism to thrive in a system that no longer maintained the ability to quell it. Thus, we must consider whether the lack of military interventionism signals the success of populism in Turkey. Or is this yet another shift farther away from a democratic system?