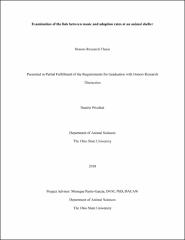 Changing the way in which a dog behaves in a shelter environment can directly influence the likelihood of that dog being adopted. Previous research has found that playing classical music in a shelter setting can encourage a dog to perform positive behaviors; however, no studies have examined the impact of music on adoption rate. This study consisted of three separate six-day trials; 72 total dogs participated in the study at Columbus Humane, a shelter located in Columbus, Ohio. During each trial, three treatments (classical music, pop music, and control) were tested. Behavioral scans were completed during each trial to record occurrence of undesirable behavior (vocalization, jumping, pacing, aversions). At the end of the experiment, records from Columbus Humane were analyzed to determine adoption rate during each trial. Vocalizations were most frequent in rooms playing classical music. No other differences in behavior were noted. Adoption rates were greatest in classical and pop music treatment rooms, respectively, compared to control rooms but no differences were noted in adoption rates between classical and pop music treatments. This study highlights auditory enrichment as a factor that influences adoption rates for dogs housed at shelters and a potential resource to be utilized in shelter settings to improve adoptability.