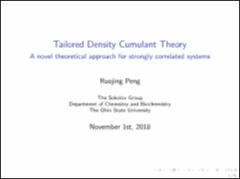 Electron correlation is an important quantum phenomenon arising from explicit pairwise Coulomb interaction of electrons. Development of theoretical approaches for efficient and accurate description of this phenomenon has always been a driving force for quantum chemistry. In many molecules and materials, electron correlation is weak. In such cases, the electrons are assumed to interact not directly with each other, but through an averaged electric field, hence the name “mean-field approximation”. From the mean-field approximation, many theoretical models are available to efficiently recover the effect of the weak correlation. However, in many new applications such as superconductor, photocatalysts and active sites of enzymes, the mean-field approximation breaks down as electron correlation becomes strong. Although theoretical models capable of describing strong correlation exist, they usually suffer from high computational and memory cost therefore are limited to small systems. Recently, hybrid models are being developed assuming that strong correlation is local, I.e. prominent for only a small subspace of the system. Whereas the strongly correlated subspace is treated extensively, the rest of the system is still modeled under mean-field approximation which makes its treatment very efficient. On the other hand, a balanced description between the strong and weak correlation is crucial for accurate results. In this presentation, I will introduce a new theoretical model termed tailored density cumulant theory (T-DCT) that efficiently describes strong and weak electron correlation in a balanced and consistent manner. Central to this theory is density cumulant, a mathematical object that captures the essence of electron correlation. I will briefly describe the theoretical formulation of T-DCT, my computer implementation, as well as show some preliminary results of the application of this approach to several chemical systems.