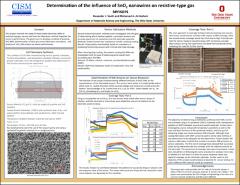 This project involved the study of metal-oxide nanowires as resistive-type gas sensors and how the fabrication method impacted the sensor’s performance. The goals were to develop a method of growing ZnO nanowires and determine the optimal number of nanowires for a sensor. The growth of ZnO nanowires involved a vapor-liquid-solid technique where source material was placed in the center of a tube furnace with a gold-coated Si growth substrate downstream. ZnO nanowire growth was observed using a graphite and ZnO source powder, a temperature gradient of 750oC, an upright growth substrate, Ar gas flow and a pressure of 50 torr. Further research into the parameters for longer and more numerous NW growth is needed. Ethanol, Methanol, DI water, and Dimethylformamide (DMF) were tested as solutions for transferring the nanowires to a substrate with electrodes, with the conclusion that DMF was the most adequate solution for testing. Solution with suspended SnO2 nanowires were dropped onto the sensor substrate, which consisted of Pt electrodes on an alumina substrate. Sensors were tested in a sealed probe station with Au probes to measure resistance. At a temperature of 350oC, a series of gases were introduced to the electrode. N2 flowed for one hour, then 21% O2 for another hour, then back to N2. The change in resistance with atmosphere determined the sensors response value. Determination of optimum number of nanowires for a sensor involved testing the sensor after every 5 drops of solution. This method for testing amounts showed that adding successive drops did not guarantee more material on the sensor, meaning the amount of material was random after the drops. The problem was approached again, testing a sensor with high material coverage versus one with lower coverage. No trend of NW amount on gas sensing properties was determined, but the data suggested that more material on the sensor meant lower resistance and larger response values. More data would determine if there is indeed a trend.