Advocacy or Abuse?: The role of U.S. immigration law in the lives of asylum-seeking Central American women 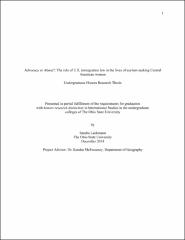 How are asylum-seeking Central American women—especially those fleeing domestic and gender-based gang violence —processed within the U.S. immigration law infrastructure, such as the immigration courts? This question has become especially trenchant since the US Department of Justice this summer overturned years of case law to deem this population (women deemed “unable to leave relationships”) ineligible for asylum. The current project engages this high stakes and highly dynamic legal terrain through an ethnographic study of non-profits and legal clinics in the DC-Maryland-Virginia area who are working on behalf of these women. Through multiple interviews with immigration attorneys and legal scholars as well as participant observation of legal proceedings (e.g., affidavit composition, court appearances), I tracked, over three months, the processes by which women negotiate their precarious legal status from border to green card, or deportation. I found that even in a region (the DC area and surroundings) with a significant array of legal support and advocacy for the immigrant community, the ability of the immigration courts and judges to remain impartial and provide fair legal proceedings fell woefully short, therefore compromising the validity of their role as judicial arbitrators in the immigration process. Further, I found that the demand for low-cost legal services far exceeded the supply, despite impressive efforts by area non-profits and legal clinics. The results of my work fill a gap in the legal and academic literatures on the most recent barriers to procedural justice for asylum seekers in U.S. Immigration Law. This research is laying the foundation for my eventual career in public-interest immigration law, through which I will strive to serve as an advocate for vulnerable immigrant populations.