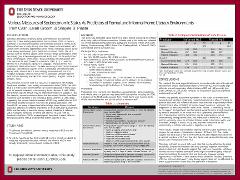 Individual differences in literacy during early childhood are important predictors of later reading ability (Sénéchal & LeFevre, 2002) and cognitive achievements (Downer & Pianta 2006). These differences in early literacy have been shown to be associated with various forms of literacy opportunities in the home, collectively known as the home literacy environment (HLE; Sénéchal & LeFevre, 2002). HLE includes both an informal aspect, which involves “those [activities] for which the primary goal is the message contained in the print,” and a formal aspect, which entails “those [activities] for which parent and child focus on the print” (Sénéchal & LeFevre, 2002, p. 1). Each aspect of HLE is correlated with different aspects of future literacy. HLE, however, does not exist in a vacuum; it is associated with multiple family-level variables, most notably socioeconomic status (SES). Like HLE, SES can be conceptualized in many ways. The researchers hypothesized that different aspects of SES would be differentially related to HLE, and that Informal HLE would be more strongly predicted by income-related measures, whereas Formal HLE would be more strongly predicted by education-related measures. To disentangle this complex association between SES and HLE, the researchers administered surveys to the parents of 393 preschool-aged children in Columbus to document their Informal HLE, Formal HLE, and multiple aspects of their SES, including income, income-to-needs ratio, and parental education. Multiple regression was used to predict Informal and Formal HLE from the various SES measures. Results indicated that income (β=.182, p=.010), income to needs ratio (β=.179, p=.014), and maternal education (β=.207, p=.013) are unique, significant predictors of Informal HLE. No measures of SES were significant predictors of Formal HLE. The results suggest that SES plays a role in Informal HLE, but also suggest that SES is not a catch-all predictor of HLE and that factors not explored in this study may predict both Informal and Formal HLE. Although the results do not fully support hypotheses, they suggest the existence of complex associations between SES and HLE that must be understood in order to develop initiatives that address the underlying causes of disparities in early childhood literacy.