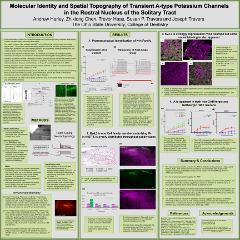 The potent hedonic properties of tastes strongly affect dietary selection and are linked to clinical conditions associated with overconsumption and obesity. Understanding how taste is represented and processed in the brain is thus important to promote human health. CNS gustatory processing begins in the rostral nucleus of the solitary tract (rNST). Factors influencing the output signal from the rNST to areas that control ingestive behavior include the synaptic interactions of neurons within the nucleus and the intrinsic membrane properties of the neurons themselves. In particular, transient A-type potassium channels, which produce an outward IA current, have been shown to modulate sensory signals in both the caudal and rostral poles of the NST. However, the molecular identity of the IA channel on the two major phenotypes of neurons within the rNST, GABAergic interneurons and glutamatergic projection neurons, as well as the distribution of these channels within the different subdivisions of the rNST remains unclear. Previous literature suggest that IA is concentrated on non-GABAergic projection neurons in the central subdivision of rNST, while the channels are absent on GABAergic neurons in the ventral subdivision. However, we recently found that a subpopulation of GABAergic neurons do contain IA. Consequently, IA current is not exclusive to non-GABAergic projection cells, but exists on both cell phenotypes. In the present study, immunohistochemical and pharmacological approaches were used to identify the molecular identity of the potassium channel contributing to IA in the rNST and to describe its location within the nucleus. These data suggest that Kv4.3, a member of the Kv4 family, is primarily responsible for the IA current. Furthermore, it was observed that this channel is evenly distributed throughout the rNST, predominately in the neuropil, rather than on the cell soma. Pharmacologically blocking the IA channel using a toxin specific to the Kv4 family had similar effects on both GABAergic and non-GABAergic neurons. In both cell phenotypes the toxin reduced the first-spike delay and IA current amplitude seen in cells with IA. Because the expression of IA is sensitive to inhibition, we are exploring the interaction between IA and inhibition in sensory processing in the rNST.