Japanese Particle i: A Study in Early Middle Japanese 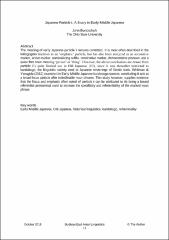 The meaning of early Japanese particle i remains contested. It is most often described in the kokugogaku tradition as an 'emphatic' particle, but has also been analyzed as an accusative marker, active marker, nominalizing suffix, nominative marker, demonstrative pronoun, and a quasi-free noun meaning 'person' or 'thing'. However, the above conclusions are drawn from particle i's quite limited use in Old Japanese (OJ), since it was thereafter restricted to kundokugo, the linguistic variety used in Japanese renderings of Sinitic texts. Whitman & Yanagida (2012) examine i in Early Middle Japanese kundokugo sources, concluding it acts as a broad focus particle after indeclinable noun phrases. This study however, supplies evidence that the focus and emphasis often noted of particle i can be attributed to its being a bound referential pronominal used to increase the specificity and referentiality of the marked noun phrase.