Talking like a Shōnen Hero: Masculinity in Post-Bubble Era Japan through the Lens of Boku and Ore 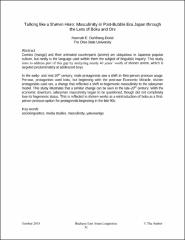 Comics (manga) and their animated counterparts (anime) are ubiquitous in Japanese popular culture, but rarely is the language used within them the subject of linguistic inquiry. This study aims to address part of this gap by analyzing nearly 40 years' worth of shōnen anime, which is targeted predominately at adolescent boys. In the early- and mid-20th century, male protagonists saw a shift in first-person pronoun usage. Pre-war, protagonists used boku, but beginning with the post-war Economic Miracle, shōnen protagonists used ore, a change that reflected a shift in hegemonic masculinity to the salaryman model. This study illustrates that a similar change can be seen in the late-20th century. With the economic downturn, salaryman masculinity began to be questioned, though did not completely lose its hegemonic status. This is reflected in shōnen works as a reintroduction of boku as a first-person pronoun option for protagonists beginning in the late 90s.