The Existence of Pseudoclefts in Japanese 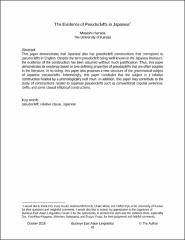