A Contrast of L1 Pronominal Usage: Japanese and Mandarin in Oral Narratives 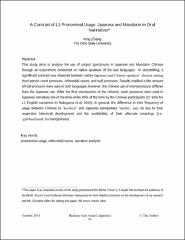 This study aims to analyze the use of subject (pro)nouns in Japanese and Mandarin Chinese through an experiment conducted on native speakers of the two languages. In storytelling, a significant contrast was observed between native Japanese and Chinese speakers' choices among third-person overt pronouns, referential nouns, and null pronouns. Results implied a fair amount of null pronouns were used in both languages, however, the Chinese use of overt pronouns differed from the Japanese use. After the first introduction of the referent, overt pronouns were used in Japanese narratives 5% of the time while 48% of the time by the Chinese participants (cf. 92% for L1 English narratives in Nakayama et al. 2015). In general, the difference in their frequency of usage between Chinese ta 'he/she/it' and Japanese kanojo/kare 'she/he', may be due to their respective historical development and the availability of their alternate meanings (i.e., 'girl/boyfriend' for kanojo/kare).