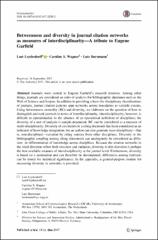 Journals were central to Eugene Garfield’s research interests. Among other things, journals are considered as units of analysis for bibliographic databases such as the Web of Science and Scopus. In addition to providing a basis for disciplinary classifications of journals, journal citation patterns span networks across boundaries to variable extents. Using betweenness centrality (BC) and diversity, we elaborate on the question of how to distinguish and rank journals in terms of interdisciplinarity. Interdisciplinarity, however, is difficult to operationalize in the absence of an operational definition of disciplines; the diversity of a unit of analysis is sample-dependent. BC can be considered as a measure of multi-disciplinarity. Diversity of co-citation in a citing document has been considered as an indicator of knowledge integration, but an author can also generate trans-disciplinary—that is, non-disciplined—variation by citing sources from other disciplines. Diversity in the bibliographic coupling among citing documents can analogously be considered as diffusion or differentiation of knowledge across disciplines. Because the citation networks in the cited direction reflect both structure and variation, diversity in this direction is perhaps the best available measure of interdisciplinarity at the journal level. Furthermore, diversity is based on a summation and can therefore be decomposed; differences among (sub)sets can be tested for statistical significance. In the appendix, a general-purpose routine for measuring diversity in networks is provided.

© The Author(s) 2017. This article is distributed under the terms of the Creative Commons Attribution 4.0 International License (http://creativecommons.org/licenses/by/4.0/), which permits unrestricted use, distribution, and reproduction in any medium, provided you give appropriate credit to the original author(s) and the source, provide a link to the Creative Commons license, and indicate if changes were made.