The Elephant in the Room: Sidestepping the Affirmative Consent Debate in the Restatement (Third) of Intentional Torts to Persons 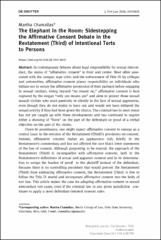 Rights of the article belong to De Gruyter Publishing.