The Pressures of Partial Crystallization along the Galápagos Spreading Center 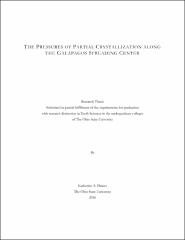 As part of a larger project aimed at understanding the magma plumbing systems and magmatic processes responsible for crust formation at divergent plate margins, we have begun a study of the Galápagos Spreading Center (GSC), an intermediate spreading ridge off the west coast of South America and connected to the East Pacific Rise. This ridge is of interest because it passes close to the Galápagos Islands, allowing the effects of a mantle plume on sub-ridge processes and magma plumbing systems to be examined. In addition, the effects of ridge-ridge intersection, ridge propagation, and ridge offsets by transform faults on magma evolution can be examined. Published compositional data for glasses collected along the ridge were used to calculate pressures of partial crystallization and to examine variations in magma chemistry along the ridge. To aid interpretation of the results, the ridge was divided into 12 segments based on sample distribution and the occurrence of ridge offsets. Calculated pressures for most segments range between 100 and 300 MPa, and indicate depths of partial crystallization of ~3–9 km. This suggests that partial crystallization and hence crustal accretion occurs mostly near the base of the crust. The range of pressures for some segments is relatively large with maximum calculated values of 500–750 MPa. Near the major transform fault at ~85OW, the calculated maximum pressure is 741 MPa and the average pressure is ~300 MPa. It is unlikely that the calculated high pressures represent the true pressure of partial crystallization. The compositions of some magmas may result from processes other than simple crystallization. Correlations between pressure and MgO, between Na2O and MgO, P 2O5 and K2O, and between Na8 and longitude suggest that the processes operating beneath this ridge are complex. Near the transform fault MgO vs pressure shows a negative correlation with an R2 value of 0.546. Such trends are inconsistent with magma evolution via crystallization alone suggesting that crystallization was accompanied by interaction with pre-existing crust. Modification of magma compositions through assimilation of oceanic crust probably accounts for the wide range of pressures calculated for samples from some ridge segments.