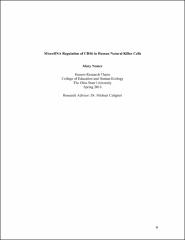 Natural killer (NK) cells are lymphocytes capable of killing virus-infected and tumor cells while leaving normal tissue unharmed. CD16 is an Fc receptor that allows NK cells to perform antibody-dependent cell-mediated cytotoxicity (ADCC) against tumor cells. We hypothesize that miRNAs (miRs) have a regulatory role for CD16 expression in NK cells. We compiled a list of 69 miRs predicted in silico to target CD16 mRNA. This list was cross-referenced with a gene expression data set of 400 miRs measured in peripheral blood (PB) from 4 healthy donors. Of the 69 miRs candidates, 3 were found to be downregulated in the CD16+ NK cell populations compared to CD16- populations. RT-qPCR showed that CD16- human NK cells in PB had approximately 25 fold higher mir-218 expression than CD16+ populations (p=0.008, n=4). RT-qPCR was also used to measure miR-218 expression during NK cell maturation stages 3, 4a, 4b, and 5 NK cells from 5 donors. The higher expression of miR-218 in stage 4a and 4b developing NK cells correlated to their low expression of CD16. Using 293T cells infected with miR-218 pCDH luciferase construct, we were able to demonstrate a 35% reduction (p=0.12, n=3) in luciferase activity with overexpression of miR-218. Thus, we have preliminary evidence that miR-218 is an intrinsic negative regulator of CD16 expression in NK cells. Ongoing work will determine the effect of overexpression and knockdown of miR-218 on CD16 expression, ADCC killing, and cytokine production in a CD16+ cell line and primary NK cells.