An Urban Migraine: The Influence of Artificial Light at Night on Aquatic Primary Productivity 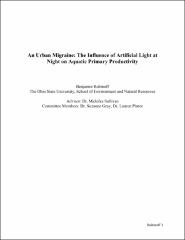 Artificial light at night (ALAN), or unnatural lighting produced by anthropogenic sources, has drastically altered the nighttime environment and is anticipated to increase as urban populations grow and electricity expands into previously unlit areas. The prevalence and predicted increases in ALAN have prompted a growing concern over light as an environmental pollutant (i.e., ecological light pollution), yet the effects of this stressor on ecosystem function remain largely unresolved. Here, the response of a common stream diatom (Navicula pelliculosa) to typical urban nighttime light levels was assessed through a 67-day laboratory experiment as measured using ash-free dry mass, gross primary productivity, and net primary productivity. Overall, diatom growth and productivity were significantly different over time and across light treatments. ALAN was associated with a decrease in ash-free dry mass and an increase in gross primary productivity, but was not related to net primary productivity. These patterns suggest that some species of diatoms may experience a physiological shift under ALAN. Since alterations in primary productivity can have strong bottom-up effects in aquatic systems, these results indicate that ALAN may have cascading trophic consequences.