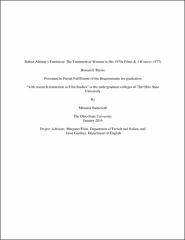 The 1970s are generally regarded in film history as the New Hollywood Era of American film. In a period of renaissance filmmaking, these films typically focus on men’s trials and tribulations. Many of these films either disregard women all together or label them as the "evil other" to overcome or to sexualize. However, given the rise of the Second Wave Feminist movement, I find the depiction and treatment of women very much at odds with the social context. In my viewings of 1970s films, I discovered that Robert Altman's films hold a certain feminist quality. The purpose of my thesis is to position Altman as a feminist director, specifically terming his mode of feminism as "Altman's Feminism." "Altman's Feminism" consists of treating women as subjects whose presence furthers the narrative story, in addition to depicting them with respect and, at times, sympathy. For my thesis I chose to closely analyze 3 Women (1977) through a feminist-psychoanalytic lens. My thesis closely examines and argues 3 Women as an "Altman Feminist" film, specifically through its comparability to the feminist psychoanalytic film theory that was popular at the time. I discovered that in comparing the film with Laura Mulvey's seminal feminist film essay, "Visual Pleasure and Narrative Cinema," 3 Women, like the essay, explores and condemns patriarchy’s hold on women in society through positioning them as objects. With this reading, 3 Women encapsulates the meaning of "Altman's Feminism" and affirms that there is a film that matches the period's social context. This examination of Altman's films is not only important for viewers searching for a feminist outlet in the New Hollywood Period, but also can be utilized to examine Altman's entire filmography.