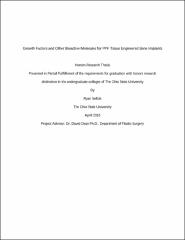 This project aims to study the differentiation of bone-marrow derived human mesenchymal stem cells (BM-hMSCs) towards an osteogenic lineage in order to create tissue engineered bone grafts. This was accomplished in two parts: first, BM-hMSCs were seeded on two-dimensional (2D) poly(propylene fumarate) (PPF) scaffolds in the form of 1 cm2 thin-film coupons and then the protocol was extended to 3D printed PPF scaffolds with Schoen’s gyroid pore architecture. The goal of the first part of the project was to determine the optimal growth factor dosage that will bring about the deposition of a 30-50 µm thick layer of bone extracellular matrix (ECM) on the 2D scaffolds. Combinations of growth factors, such as fibroblast growth factor (FGF-2), platelet-derived growth factor (PDGF-bb), and epidermal growth factor (EGF) were studied in static culture of seeded BM-hMSC proliferation. The goal here was to coat the surface densely with these cells. Based on the results from the study, the 1X dosage of FGF-2 (5 ng/ml), PDGF-bb (40 ng/ml) and EGF (20 ng/ml) was significantly better than other regimes at facilitating hMSC proliferation. Next, differentiation of these cells into osteoblasts was attempted by changing the cytokine regime to bone morphogenetic protein-4 (BMP-4), BMP-6, or BMP-7. These were added to static culture at the optimal dose based on our experience and/or the literature. That single dose (1X) was compared with 10X dose concentrations. The optimal single (i.e., 1X) dose of BMP-7 (27 ng/ml) along with osteogenic media was the most successful regime for BM-hMSC differentiation into osteoblasts as well as subsequent mineralization. The second part of the overall project focused on the replication of the findings on 3D printed porous scaffolds with Schoen’s gyroid pore geometry. Validation of initial seeding and spreading of BM-hMSCs on 3D scaffold surfaces indicates a smooth translation of our thin film (i.e., 2D) results to 3D scaffolds.