Muscle Forces and their Contributions to Acceleration during Stair Descent 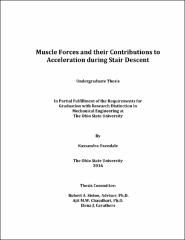 Stair descent (SD) is a difficult, potentially dangerous task for populations with lower limb pathologies, such as the elderly and those with osteoarthritis (OA). Previous studies have investigated lower limb joint torques and muscle activations during SD in young, healthy populations using traditional gait analysis. These results have been used to inform rehabilitation for pathological populations, which often focuses on muscles that are active during SD. However, rehabilitation is not 100% effective. Other studies have also examined how speed affects SD since young, healthy populations often perform SD at faster speeds than those with pathologies. At faster speeds, young, healthy populations tend to increase the joint torque from the hip, but not the knee or ankle, which is unexpected. Investigating how muscles accelerate an individual during SD could explain the unexpected joint torque pattern, help gain a better understanding of the mechanisms behind SD, and inform rehabilitation. Therefore, the purpose of this study is to examine how individual muscles accelerate the center of mass (COM) during SD in young, healthy subjects at three different speeds. Quantitative gait analysis and dynamic simulations were used to determine muscle forces and their contributions to vertical and horizontal acceleration of the COM. Muscle forces and their contributions to acceleration of the COM generally increased with increasing speed except for during the controlled lowering phase; forces and contributions to vertical acceleration from the soleus, forces from the vastus medialis, and forces and contributions to vertical and horizontal acceleration from the vastus lateralis seemed to decrease with increasing speed. These results will establish a baseline to better evaluate compensatory strategies and deficits in populations that experience difficulty completing SD, and eventually allow for improved rehabilitation for these populations.